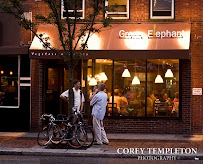 Friday morning, we got up bright and early and took the train to Bronxville, where we were picked up by our friends Arthur and Al, and off we went to Maine, our destination being Rick Wohlfarth’s house in Cundy’s Harbor.  On the way, we stopped off in Portland for lunch and a quick tour of downtown and the old port.  This city has come a long way from what I remember in the 1970’s, when it was a rundown backwater.  It has turned into a trendy, vibrant place with lots of cutting-edge restaurants, and a surprising number of new and architecturally interesting hotels.  Since Al is a vegan and would be spending the rest of the weekend watching the rest of us gorge on lobsters, mussels, oysters, crabs, clams and halibut, we decided to treat him to lunch at the Green Elephant (photos above from their website), which I had found in my research to be a highly-regarded vegetarian restaurant with Asian-style dishes, many of which were vegan.  Though I would have preferred some meat or fish in my Thai ginger noodles, the tofu was not bad at all, and the rest of the flavors made it a multi-dimensional dish that I really enjoyed.  It did need some spicing up, so I asked for Sriracha sauce, and it did the trick very nicely.  They had a good beer selection, too.  I liked the Shipyard Old Thumper, a dark amber ale, very much.

After lunch we pressed on to Cundy’s Harbor, a seaside village outside of Brunswick that oozes charm.  Continued in my next post.