Once again we have been searching for a good burger in the $10 range, since our latest fave,  Joy Burger Bar, closed. Last night we tried the 6th Ave. location of New York Burger Co. (there is another on West 23rd), and were really happy with the result. Like at Joy, you order at the counter, and are notified when your food is ready (they are very efficient). There are plenty of tables. I had a double burger with cheddar, and Stanley had the Tribeca Burger (blue cheese, avocado and bacon). They were perfectly cooked, the meat had good flavor and the buns are of high quality. The onion rings were absolutely delicious. We got a pitcher of beer, which was brought to the table. There is a good selection of sauces to top the burgers. I loved it and will make it a regular stop.

UPDATE:  Dover has closed due to lack of business.  Surprising.

Last night, we visited friends in Brooklyn, and were treated to a lovely dinner at Dover, a modern American restaurant on Court Street. The food was excellent, so I was surprised that it was not at all busy.

They have a happy hour that runs until 8 pm, during which they offer oysters, raw or broiled, for $1 apiece. I had a half-dozen each of raw and broiled. I love oysters so this was great fun. They give you delicious little gougeres to start, then an amuse-bouche of tomato soup.  The lamb loin I had for my main was perfectly done, and served with Brussels sprouts and chanterelles. I also got to taste the ravioli and pappardelle, both excellent. I drank a milk stout (Against the Grain from Louisville, KY), very tasty.

Main course choices include three meat and three fish dishes. The fish can be had as a large or small portion. A pasta and a small fish course could make a filling meal.

I could definitely see returning to Dover.

This past Saturday we attended the Hudson Valley Dance Festival in Catskill, sponsored by Dancers Responding to AIDS. As always, Stanley and I were members of the host committee. The pre-performance reception began at 4 o’clock, at historic Catskill Point, and though it was a cloudy day, rain held off until after the performance. This was the first time there were two performances, and both the afternoon and evening were sold out. Seven hundred attended in total, and ticket sales and donations resulted in more than $135,000 being raised, well above last year’s numbers.

Wine and snacks under the tent

After the reception, we moved indoors for the performance. Five companies were represented, and each gave their all to keep everyone happily engrossed for the duration.

The following photos of the performance are by Daniel Roberts:

Following the performance, we headed to the VIP reception. this time held at a new event space  on Main St. in Catskill called Joe’s Garage.  The very good food and wines made for a nice early dinner, and we had a great time schmoozing with old friends and making interesting new acquaintances. 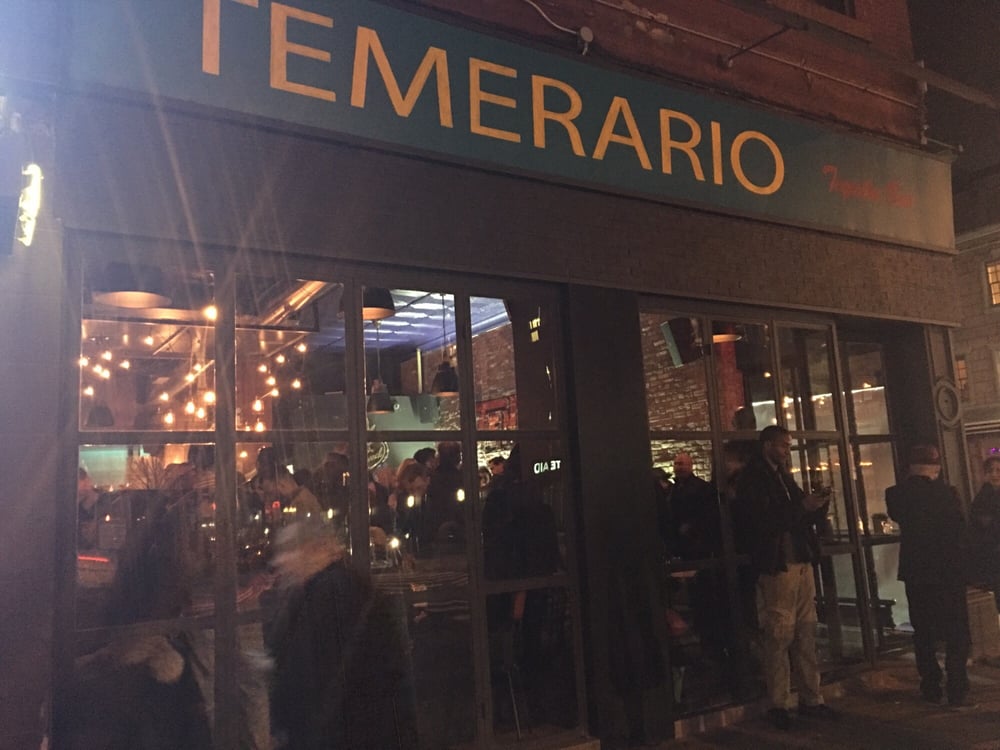 Temerario opened in February, but surprisingly, I was not aware of it until I received a Blackboard Eats offer yesterday. The fourth venture of the team behind Black Ant, Ofrenda, and Gardenia, it immediately looked promising to me, and we decided to try it last night. Some reports I read criticized food, service or both, but we loved the dishes we had, and the service was perfect.

Knowing that the portions at their other restaurants tend to be generous, we ordered two appetizers and one main course, and it was indeed plenty of food. We shared the fish tacos to start, and accompanied it with a smoky jalapeno Margarita (delicious!) and a “Bad Habit” (rum, cherries, etc., also very good).  For a main course, we shared the duck tacos and the burger. The burger was full of flavor, perfectly medium rare, and came with delicious fries, a pickle and a pickled jalapeno. We accompanied this course with a Negra Modelo.  This is a nice addition to the neighborhood and we will be back soon to try out more dishes.

We got an early start from Annecy, drove to Lyon where we said our tearful farewells to “Jean,” our devoted GPS lady, and dropped off the rental car, and after buying some splendid sandwiches and apricot tarts at Patisserie Paul in the station, we boarded the TGV to Paris. Arriving at Ana and Bertrand’s in La Varenne in mid-afternoon, we got settled and walked into town to see if the lady who runs the Spanish store had been able to get more Pedro Ximenez sherry.  Sadly not, so we stopped at the local Nicolas and bought a bottle of port.  In the evening, we drove into Paris, enduring a terrible traffic jam and arriving half an hour late for dinner at L’Os a Moelle.

The last time we were at L’Os a Moelle was five years ago, not long after it opened. Since then, there was a change of chefs, but in the last couple of years the original chef returned. We enjoyed our meal this time as much as the first. The five course menu for 42 euros is still a bargain. These are the dishes we had:

Quail topped with a quail egg

Saddle of veal with potatoes, vegetables and mushrooms

Duck breast with mushrooms and potatoes

Bass with carrots, eggplant and parsnips

Wines are very reasonably priced too. They sell them to go, and add only 8 euros if you are having it in the restaurant.  Our server was lovely. I am so glad we decided to return here, and would highly recommend it.

Ana and Bertrand prepared a capital picnic lunch, and we set out on a day trip to the Abbaye de Royaumont and Chateau d’Ecouen. The abbey is set in a beautiful park, and though the cloister is pretty much intact, the abbey church which was once attached to it is gone, with just a bit of its foundation and one tower remaining.  There are computer generated reconstructions of what the church looked like.  It was a special devotion of Louis IX, a/k/a Saint Louis, and is now owned by a private foundation.

As we were not permitted to have our picnic on the grounds, we asked in the gift shop for another suggestion, and drove off to find the recommended place, which turned out to be very nice. After lunch, we went to the Chateau d’Ecouen, established by (Mr.) Anne de Montmorency, Constable of France, which houses a museum of renaissance art and artifacts.

For dinner Saturday night, Stanley and I took the train to Le Baratin. This bistro gets rave reviews, but my main reason for wanting to try it was that they serve a lot of organ meats. It turns out they do it very well. I have mixed feelings, though. We spent more here than at any other place we went to in Paris. The wine I chose, a Bourgogne rouge 2014, was their lowest priced one, at 42 euros. It was drinkable but not at all special. The typical retail price would probably be 6 to 8 euros.

Everything is a la carte, there are no set menus. The appetizers and desserts are reasonably priced, but the main courses are quite high for a bistro, at 24 to 34 euros. All this being said, the food was great. I started with cervelle (calf brain) in a butter and lemon sauce, a generous portion, delicious and light as a feather. Stanley had an intensely flavored veloute de poisson. My main was barbue (brill), a tasty piece of fish, while Stanley’s coeur de ris de veau was a large block of sweetbreads, perfectly done and much less heavy than this dish can often be. For dessert, he had roasted figs and I had a sable biscuit with raspberries and whipped cream, both excellent. The bill came to 142 euros.

We spent Sunday in La Varenne. Bertrand made an early dinner of stewed rabbit with prunes, served on noodles. Stanley and I went to the farmers’ market to get some additional items and for a light evening supper, which we would be cooking. We bought a piece of fromage de tete (head cheese), filets of daurade, and some cherry tomatoes for a side dish, and picked up some more Cotes du Rhone and another bottle of port at Nicolas.

Alex, Ana and Bertrand’s son, joined us for dinner, which began with kirs and canapes of mussels on bread. Next came the appetizer of head cheese, followed by the main course of rabbit, ending with an assortment of cheeses including epoisse and the robiola with black truffles we brought from Alba.

After dinner, we went out for a stroll. Ana had discovered that there was a tour of artists’ studios in the town of St. Maur, which includes La Varenne. There were far too many for us to see more than a handful, but we went to the closest ones. These are serious artists: painters, sculptors, ceramists and photographers. Some worked in more than one of these media. The artworks were quite good for the most part, and it was an interesting experience for us to see the works in their homes or studios and to experience the passion of the artists.

In the evening, Stanley and I prepared a supper of daurade, sauteed cherry tomatoes, and potatoes sauteed in duck fat with truffle cream and truffle salt. We dined dans la cuisine, and it was all quite delicious.

This was our last day, and since we did not have to leave until evening, we had another chance to enjoy Paris. Being a Monday, almost all museums were closed, but the Louvre was open, so we went there. I hadn’t been in many years, and it looked quite different from what I remember. There is now a shopping mall on the lower level. The whole building was mobbed, with idiots walking around staring at their phones and taking selfies. What has happened to our society? We didn’t have a lot of time, so decided, out of perverse curiosity, to check out the British and American paintings (there were about a dozen British and one Thomas Cole; this is primarily a European museum) and the apartment of Louis XIV. The rooms had been recently restored and were quite splendid.

We had lunch at Le Radis Beurre in the 15th arrondissement. The design of the restaurant and spacing of tables feels more upscale than the typical bistro, similar to Mensae and Pirouette.  The 3-course menu at 34 euros (2 courses are 25) includes a good choice of dishes.

I had the pig’s feet and the Guinea hen, while Stanley had chicken liver terrine and veal kidneys. The pig’s feet were particularly impressive, but it was all excellent. My ris au lait reminded me of the one I had at Pirouette several years ago, just perfect. Stanley had a poached pear in chocolate sauce with speculos ice cream. With a bottle of Brouilly, the bill was 98 euros.

After lunch we hurried back to La Varenne, finished packing and were ready for our taxi at 4:45. Our evening return flight was just as pleasant as the one going. We again arrived ahead of schedule and were home before midnight, having had another memorable European trip.