I was just looking at these photos I took last February, and thought it would be fun to post them.  Driving by a farm near our house in Claverack, we saw a flock of sheep, with their babies, in a pen right by the road.  It was very early in the year for them to have been born, but there they were. So, to keep them cozy, each one had a sweater on, in several fashion colors.

They’re a bit hard to see, but if you click on each photo it will display more clearly. 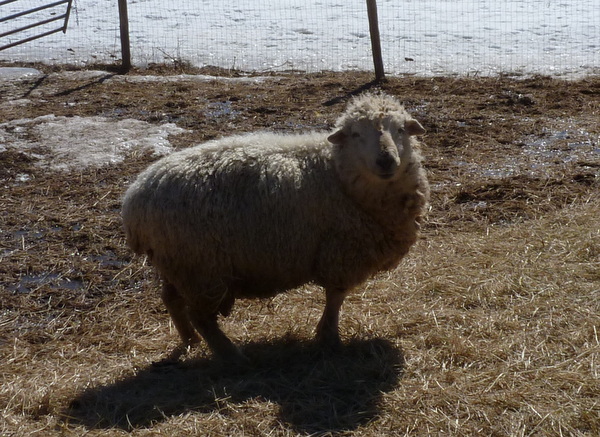 Cocktail hour at the Opera House

This past Saturday we attended the 20th annual Movable Feast, a fund-raising event for the Hudson Opera House, a historic building in Hudson, New York that is in the process of restoration, and houses exhibit and performance spaces.  The Opera House also has art, music and theater programs for children and adults.

As always, the festivities began with wine and hors d’oeuvres at the Opera House, all donated by local businesses.

After nibbling and chatting with old and new friends, we moved on to dinner.  Dinners were hosted by 16 volunteers at their homes or businesses.  We had a lovely dinner at the home of architect Peggy Anderson, a spectacular two-story loft building directly behind the Opera House. Her good friend Darren Norris, visiting from Brooklyn, prepared a meal of Persian specialties.

We started again with cocktails – a special concoction following the Persian theme – and began to introduce ourselves to the other guests and the three rambunctious but well-behaved dogs.  There were four couples and four singles, with assigned seats at a long trestle table.  Architecture, graphic design, medical, real estate and non-profit administration (and one lone lawyer) were the dominant skill sets in attendance.  The first course was a pumpkin soup with pomegranate infusion. The main course was a duck stew with a sauce of ground walnuts and spices served with wondrously aromatic rice with a crust and mixed greens.

The idea is to return to the Opera House at around 9 or 9:30 for dessert, but this time, as has sometimes happened in the past, dessert was served – a selection of Persian pastries accompanied by cognac.   The conversation was so engrossing, the space so embracing, and the dogs so entertaining that we did not leave until almost 11, and thus did not return to the Opera House.

Standing on Peggy’s upper deck (which had just gotten its railings!), one could see the transformation in Hudson wrought by institutions such as the Opera House.  Every neighbor’s house was bright with lights and activity, vanquishing the gloom and fear of the past. One of our friends, who runs a B&B in Hudson, remarked that he stumbled upon a traveler sitting on his front porch, hoping there was a room available.  The last available hotel room in Columbia County that weekend was in Chatham, and the gentleman was sent on his way.

In the past, the Movable Feast has been held in April, but was moved this year to October to accommodate a shift in the date for the Opera House Gala.  Attendance was not as robust, but it was quickly noted the number of competing events and benefits (John Waters at Basilica Hudson, for example) that have made Hudson such a thriving hive of cultural buzz.  We are very happy to remain loyal to the Movable Feast. 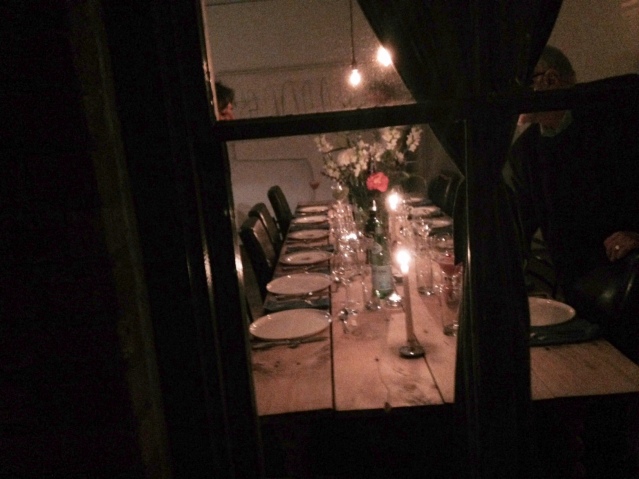 The table, set for dinner at Peggy Anderson’s

This is a perfect starter home or pied-a-terre with incredibly low maintenance!

To view, click on images below and enlarge as needed: 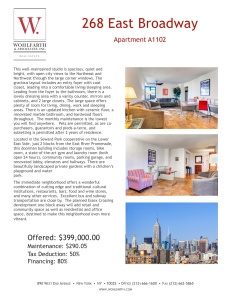 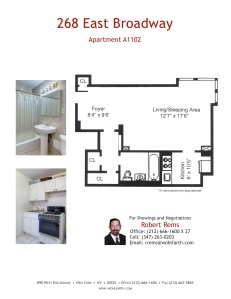 Please visit the web page to see photos and video: 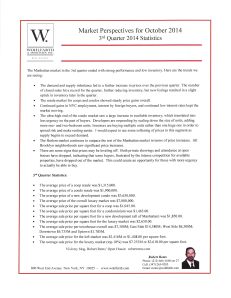 On Saturday we attended the second annual Hudson Valley Dance Festival in Catskill, sponsored by Dancers Responding to AIDS. Stanley and I were members of the host committee, so we had done our best to invite our sophisticated and culturally responsible friends to join in support. By four o’clock, the gratin of Hudson Valley society began to descend upon Catskill at historic Catskill Point, where the Catskill Creek meets the Hudson River. The weather was perfect, creating a splendid outdoor setting of Fall foliage along the Hudson River, expertly arranged by the volunteer set designers, for the pre-performance reception. The 350 seats were sold out long ago, but this year local business and major corporate sponsors began to answer the call, and the amount raised jumped from @ $75,000 to over $120,000. 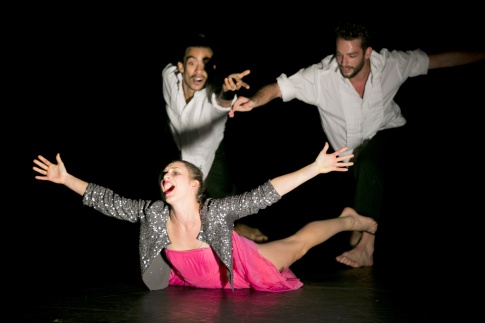 After wine and snacks, we moved inside for the performance, which was riveting. Five superb dance companies participated: Pontus Lidberg Dance, Gallim Dance, Keigwin + Company, Dorrance Dance and Paul Taylor Dance Company. Pontus Liberg opened with Faune set to Debussy, wherein the cast cannily exchanged their pants, until the identity of the true faune made itself known. In Pupil Suite, Gallim Dance gave a hyper-energetic study in imitation and emulation that truly stretched the dancers’ limbs in awkward and humorous ways. Keigwin + Company hit the mattress in Mattress Suite which had the young honeymooners bouncing into one another. The razz-matazz came when Dorrance Dance out busby-ed Busby Berkeley in Boards and Chains, where the tapping feet of 42nd Street met the Dungeon. It all came to a rapturous conclusion in Paul Taylor’s Promethean Fire, the sort of modern dance that could make it at as a half-time show on a football field (if Bard and Oberlin had football teams). We are usually loath to indulge the modern madness for standing ovations for monkey organ grinders, but there was no way we could stay in our seats after all this.

After the spectacular performance, we moved on to the reception at the home of Mark Beard and James Manfredi, which rampages through a former church in downtown Catskill chock-a-block with their artwork and other fancies. We schmoozed with friends old and new and offered our thanks to all the vibrant young talent that had come to do this one-day wonder of a performance. If you weren’t there, you may have a good excuse this time. But next year . . . 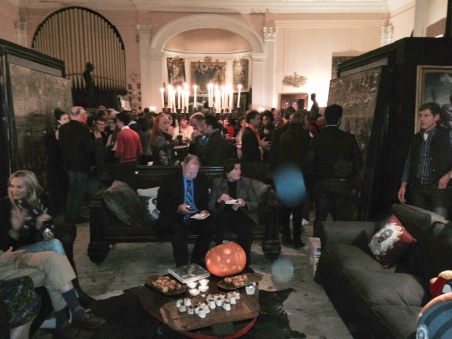 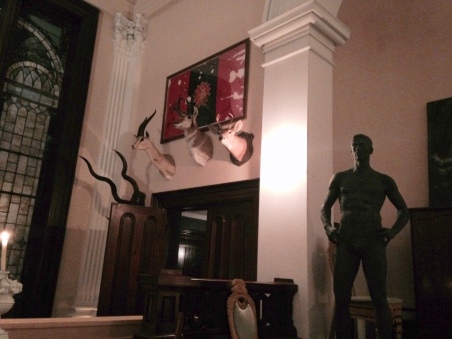 Recently opened at 6th Ave. and 11th St., Shu Han Ju doesn’t even have a permanent sign on the front yet.  Nor does it have a liquor license, so for now you will have to BYO.  I’d been waiting for it to open, but was a bit skeptical as the temporary sign says Authentic Chinese Food, Sichuan Style.  Did that mean it was really authentic Sichuan?  So once I saw the menu posted I took a look, and it seemed quite promising.  Lots of spicy dishes, many of them the same as what we’ve had at Szechuan Gourmet, so we decided to give it a try on Wednesday night, hoping it would turn out to be a good place to have around the corner from home.

I’m happy to report that we were very impressed.  The Chengdu pork dumplings were comparable to those at Szechuan Gourmet, and the ox tongue and tripe were even better.  Cumin lamb was the best we’ve had, tender and juicy, substantial pieces of lamb, again better than SG and way better than Legend.  The only dish that did not excite was the chicken with Chinese broccoli, which was supposed to be spicy but had no detectable spice (don’t know what went wrong with that one).  We added some chili oil and pepper which livened it up.

I am thrilled to have Shu Han Ju in the neighborhood, and hope they will be successful.  Even if you don’t live nearby, it is well worth a detour. 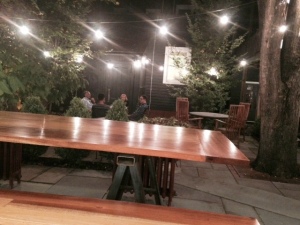 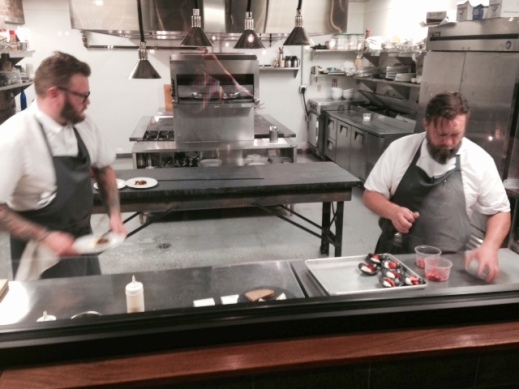 Last Saturday night Stanley and I celebrated his birthday at the Crimson Sparrow.  We have been there several times, the last being exactly one year ago, also to celebrate his birthday.  They’ve changed the tasting menu format slightly, for the better I think.  Last year, there were an amuse-bouche and 5 courses for $55, with the option of adding a foie gras course (with a glass of sweet wine). They also brought out an extra course for us. Dessert was extra, and we did not order one.  The new menu offers an amuse plus 7 courses, foie gras and dessert included, but no glass of wine, for $75. Pricey, but very much worth it.  Portions are not stingy, either.  We had an excellent bottle of 2011 Minervois for $39,

I can’t remember the details of every dish, but some highlights were fresh peas with cod and chorizo, squid cut into spaghetti-like strands and lightly cooked, New York strip steak, black bass, and chicken, egg and kimchi.  The flavors in each dish were intricate and worked perfectly together.  The chefs are extremely creative, and we felt the food quality had risen to a new level.

The beautiful garden is filled on a first-come, first-served basis, but we were able to move there from the dining room after the first course, and enjoyed sitting at the counter facing the glass-enclosed kitchen.  Service is close to perfect, and the serving of the dishes is very carefully timed, not too fast, not too slow.

All in all, a spectacular meal.