Having returned to Mexico City from San Miguel , later in the evening we walked over to El Califa taqueria.

We had pork al pastor tacos, queso fundido with poblano peppers, and a tres leches cake for dessert. They have a great selection of craft beers, and Stanley and I had a Minerva Stout. It was a simple but excellent dinner.

Thanksgiving in the US, but a regular workday in Mexico. We started the day with a trip to the Frida Kahlo museum, in Coyoacan. 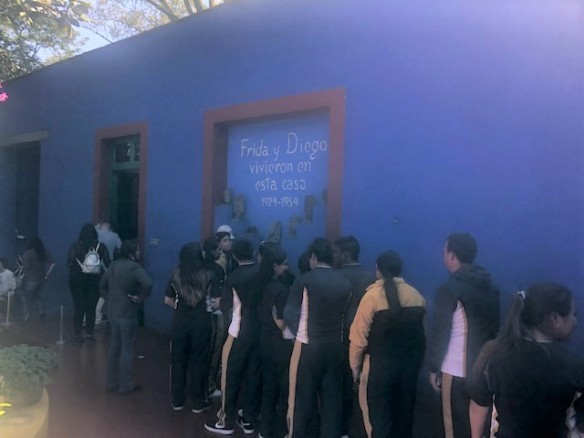 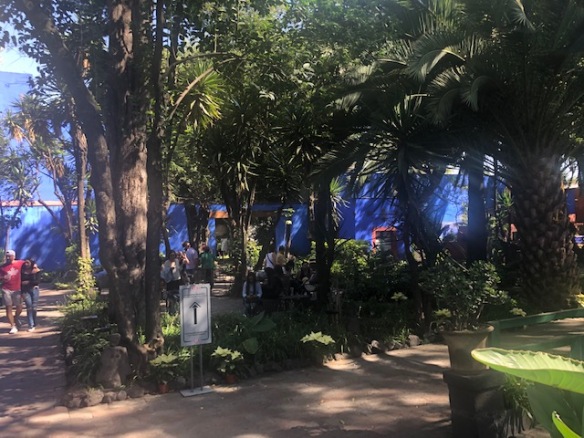 The neighborhood is charming and interesting. I wish I could say as much for the museum, which we waited an hour and a half to get into. If you do go, buy your tickets online a few days in advance to avoid the long lines. If you’ve never seen the works of Rivera and Kahlo, it may be satisfying, but having been to the Olmedo museum and seen the best, we found this disappointing.

I only photographed the building and courtyard, as the rooms were too crowded with people and the artwork not exciting.

After the museum we walked about ten blocks to the Jardin Centenario, which is surrounded by restaurants.

For lunch, we chose Corazon de Maguey, which had gotten rave reviews on Tripadvisor, and it made up for the museum. 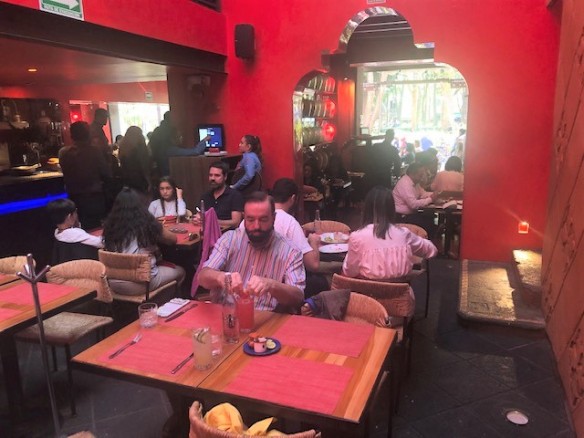 The restaurant has outdoor seating facing the gardens, but that requires a reservation, so we sat inside. I had a wonderful fish done in Mazatlan style, split open, coated with spices and grilled. It came with a quesadilla and guacamole topped with chopped tomatoes. Stanley had cochinito de pibil, a dish from the Yucatan, very similar to the carnitas that I make, but with a slightly different flavor, from bitter orange and achiote. The cocktails here are all made with mezcal. I don’t recall the ingredients in the ones we had, but they were creative and delicious. For dessert we shared a tamal de chocolate, a chocolate cake with mezcal cream that was quite good.

In the evening, we went to the restaurant in the Four Seasons hotel, which serves a traditional American Thanksgiving dinner. There were seven of us, and though the food was mediocre, the company made up for it, and the atmosphere is pretty. 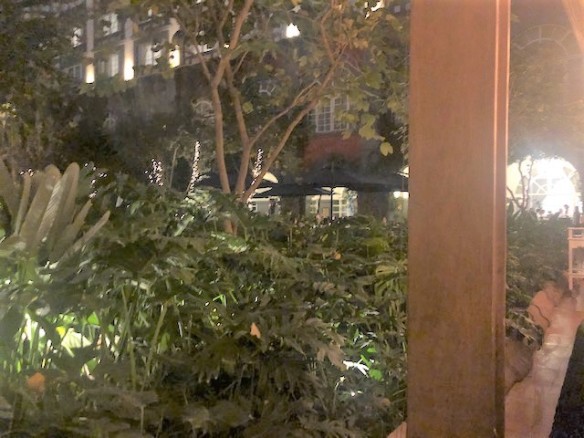 We had an early lunch at Quintonil, which we had been to in 2013, and it has evolved into one of the top restaurants in Mexico City. 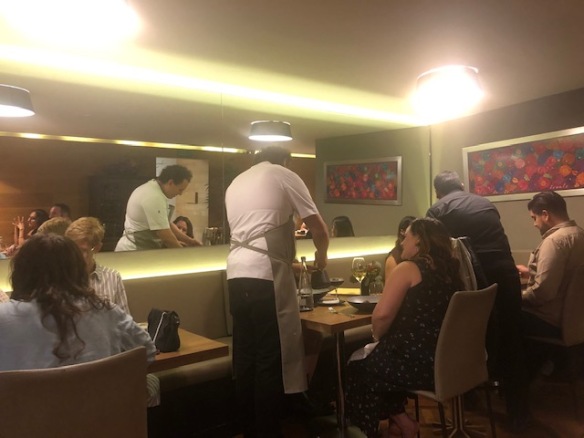 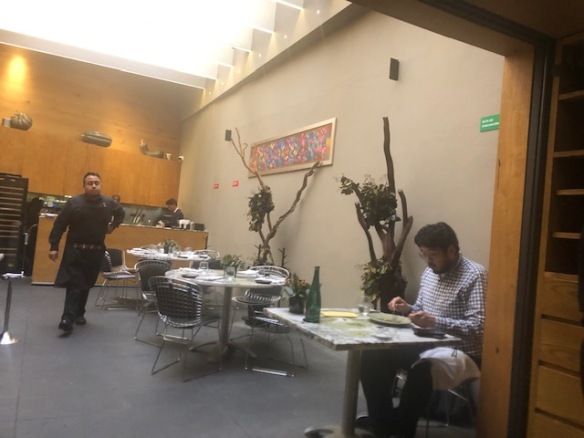 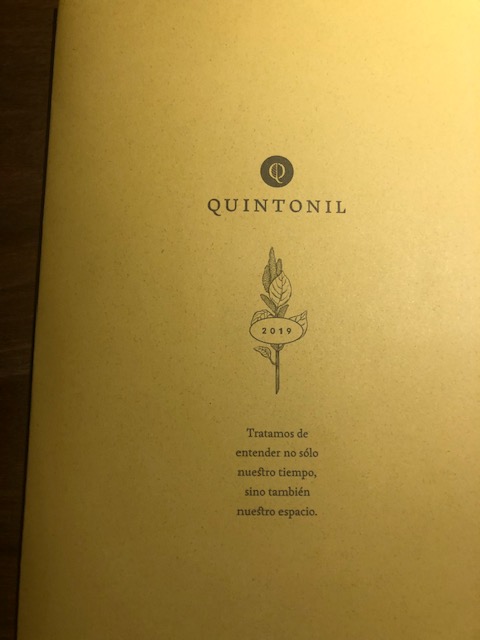 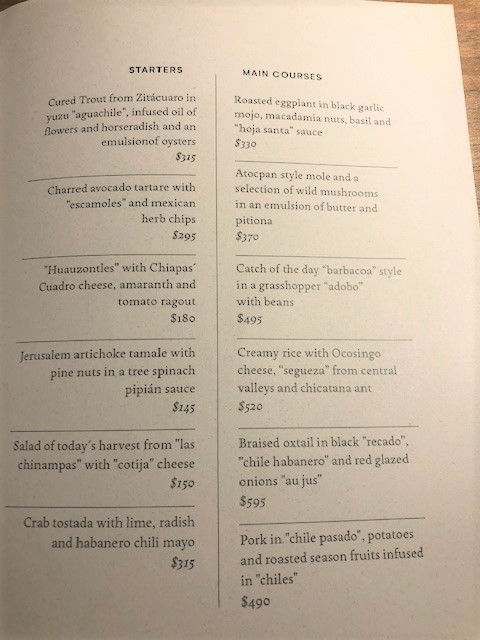 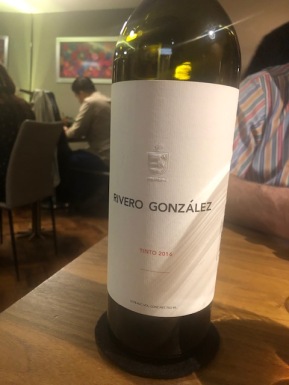 I had the cured trout, sea bass barbacoa style, and mamey (a tropical fruit) panna cotta. I tasted Stanley’s avocado tartare and braised oxtail. Everything was artfully plated and intensely flavored. There was also an amuse-bouche and a palate cleanser of cactus sorbet.

Reservations must be made well in advance.

For dinner we went to Dulce Patria, another high-end reataurant with creative Mexican cuisine. 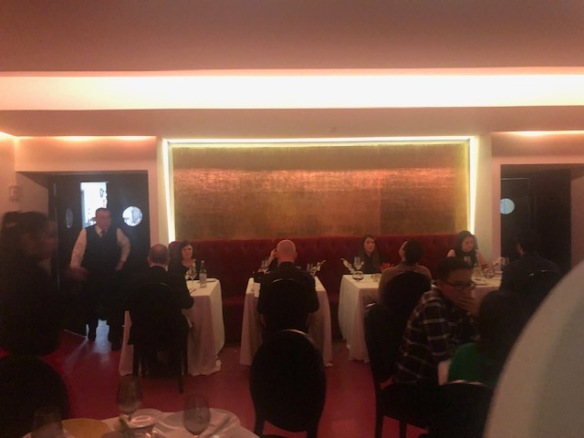 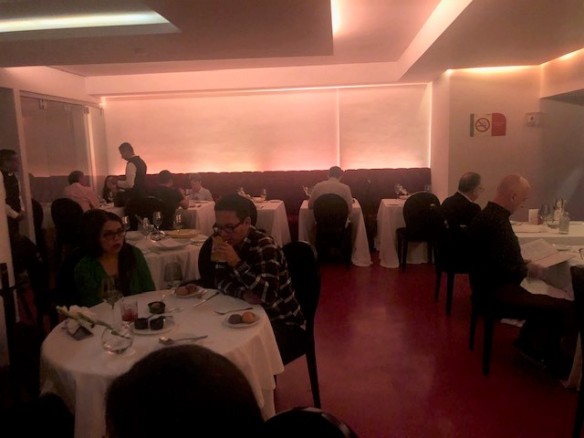 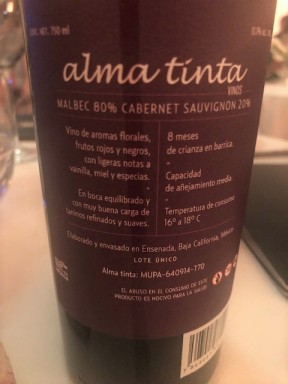 I began with a risotto with huitlacoche, then seared tuna and for dessert, a chocolate and coffee mousse. A nice plate of assorted mignardises completed the meal. It is really impossible to put into words the wonderful flavors and artful presentation. This was one of the best meals of this trip.

We went to the Tamayo Museum in Chapultepec Park in the late morning. 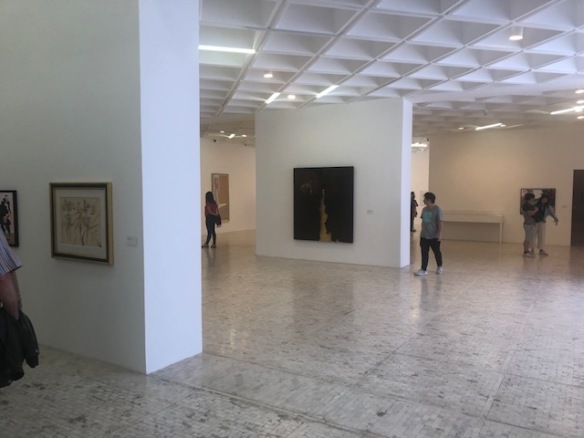 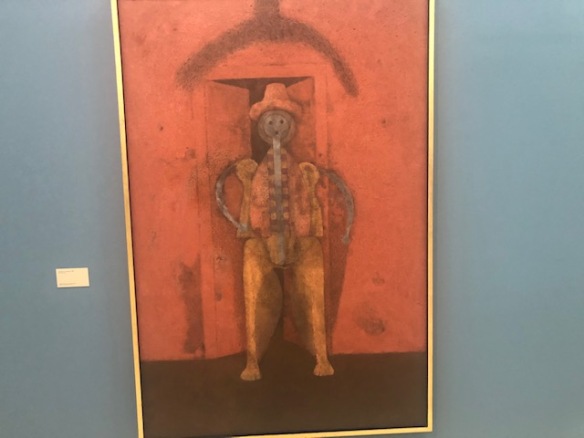 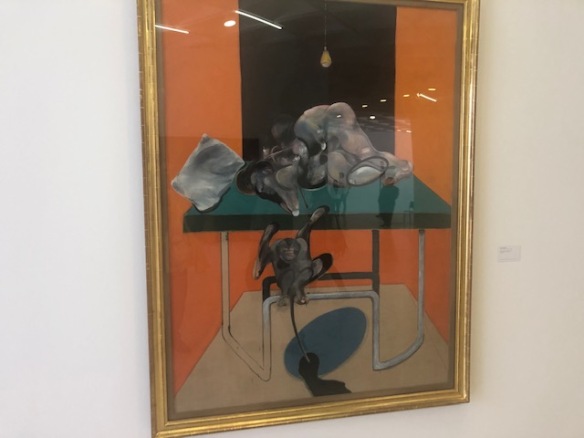 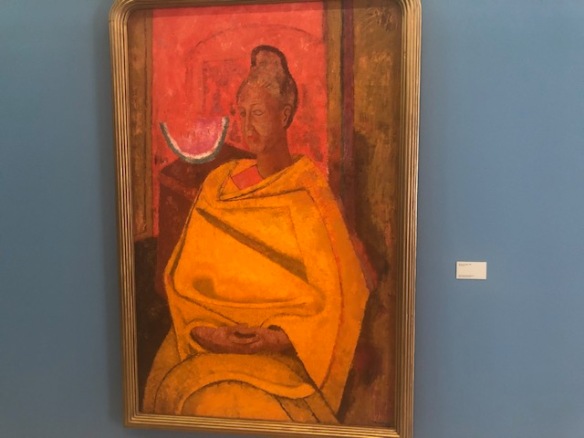 Afterward, we had a simple lunch at Eno, which is under the same ownership as Pujol. The food is decent but there is really no similarity. 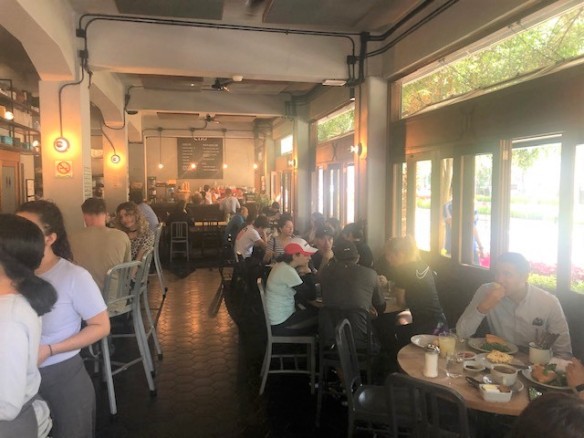 Saturday night we had dinner at Cabanna, which specializes in seafood in the style of Sinaloa, on the West coast. 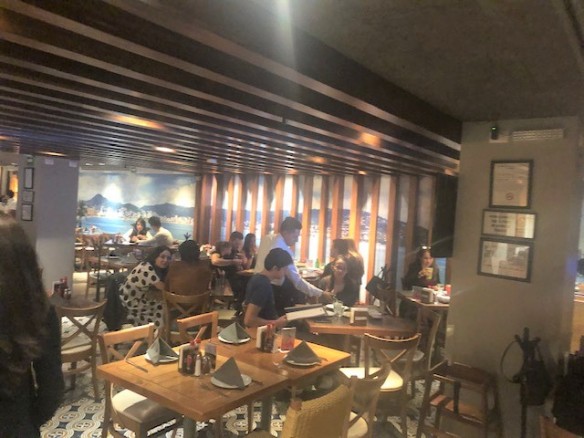 The portions are generous, prices low, and flavors forthright and delicious. I had a spicy marinated shrimp dish, grilled corvina barbacoa style, a cocktail of mezcal with mandarin orange juice, prosecco and mint leaves. For dessert we shared a molten dulce de leche cake with ice cream.

We had lunch at El Pialadero de Guadalajara, a cheap and popular spot, where we sat outside. Some of the dishes were quite good. The best were the torta ahogada de carnitas and the lonches de pierna. 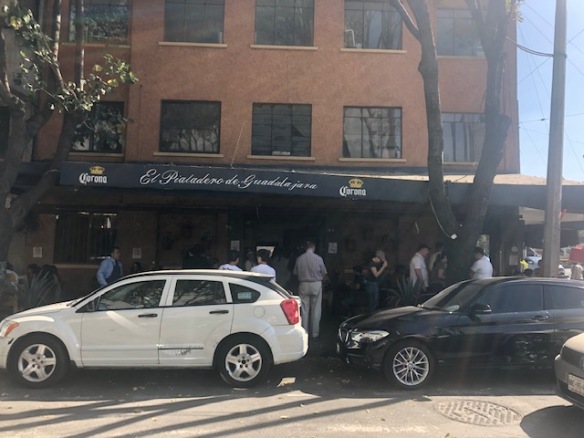 We strolled home through Chapultepec Park, stopping into the Modern Art museum, where there were three special exhibits. 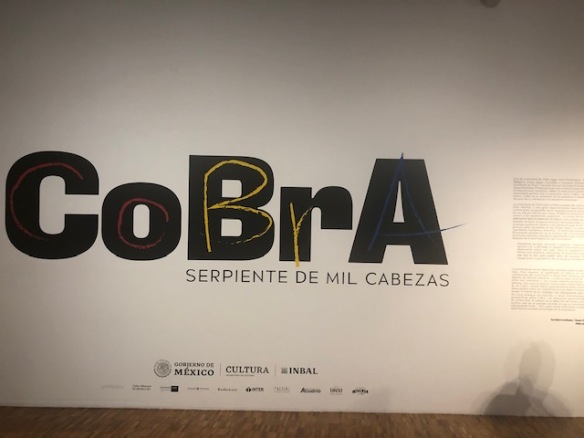 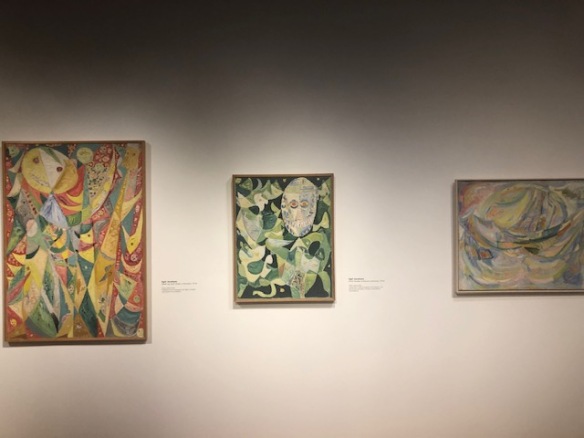 After the museum, continuing our stroll, we came upon a performance of Los Voladores de Papantla. This consists of five men climbing a pole with ropes, one controlling the ropes as they are unfurled so that the other four spin until they reach the ground. 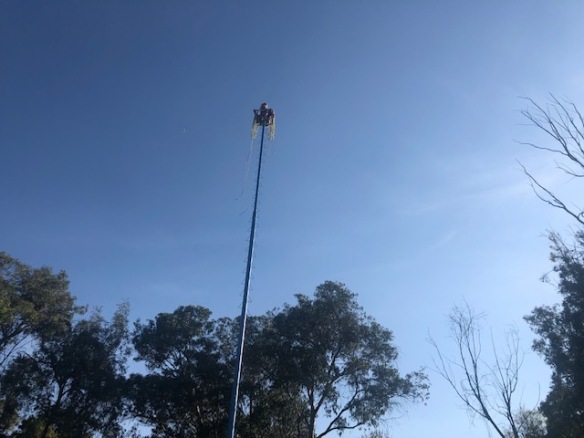 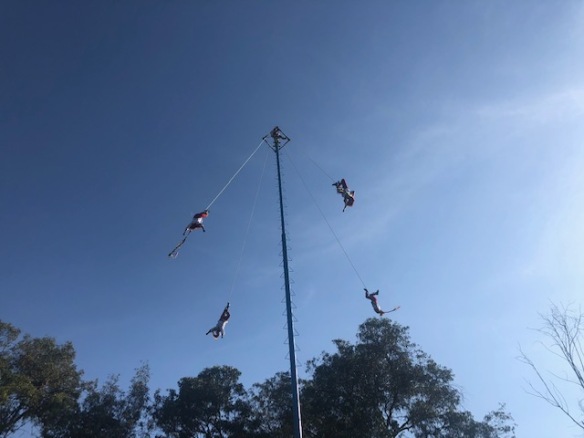 Most restaurants close early on Sunday, but taquerias are open for dinner, so we went back to El Califa (see above).

After a wonderful week in Mexico, we arose early and headed to the airport for a 9 AM flight home.