I’d read good things on Chowhound and elsewhere about Via Carota, the fairly new Italian restaurant on Grove Street in the West Village, but given that they don’t take reservations and we are highly averse to long waits, I wrote it off. Last night we were thinking about where to have dinner, and being a Monday I found several of the places I had in mind were closed. We thought Lederhosen was open on Mondays and headed over there. Though they do not take reservations either, it is not difficult to get in. Unfortunaely, though the sign on the door indicates they are open on Monday, it was shut tight.

Walking back toward Seventh Avenue, we passed Via Carota and decided to ask how long the wait was. Told it would be about twenty minutes, we figured it was worth a try, and sat down in the bar area to look over the menu while waiting for a table. Almost exactly twenty minutes later we were seated and ready to order. 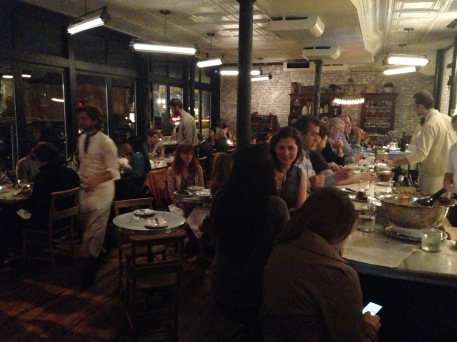 Though the concept is small plates, these are by no means tiny portions, they are actually quite generous. We ordered the chicken liver crostini (among the best we’ve had), gnocchi (perfect), fried rabbit (meaty and crisp), and lamb ribs (very rich and delicious). Nothing comes with vegetables, so we ordered a side of fava beans with lettuce and pecorino. I love favas and this was a great combination. We nibbled on it throughout the meal.

From the limited but well-chosen list of beers on tap, we chose the Black Duck porter, and it was excellent. The bill came to $100 before tip, and we were well filled, no room for dessert.

Based on favorable reports on Chowhound, we gave Rebelle a try last week. It’s no suprise that the chef worked at Spring in Paris for a long time. The style here is typical of what’s known in France as “bistronomique”, updated bistro food, simple setting, reasonable prices, but very skillful cooking. They are definitely on to something. Though I’m not a big fan of the decor (the lighting somehow manages to be dim and harsh at the same time) and the noise level, the food goes a long way to assuage these minor complaints. Service was pretty good, too, attentive and just friendly enough without being over-familiar.

They will attempt to sell you on ordering four courses, but we felt that three were quite sufficient. We did not order bread, which they charge extra for, and as we are trying to limit carbs, did not feel was necessary. We started with sweetbreads and the scallops with sea urchin. Scallops are not a favorite of mine because I find them too sweet, but these were perfectly offset by the brininess of the sea urchin. Next we had the chicken and the monkfish, both delicious, and for dessert the excellent grape clafoutis.

The very impressive wine list contains many well-chosen bottles under $50, and the markup is lower than the standard. We had a very good cotes du rhone for $40.