Leaving Cadiz this morning, we drove to Benalmadena Costa, a 2 1/2 hour trip, where we visited our good friend Cathy, in her beautiful home on a hillside overlooking the sea, a short distance down the coast from Malaga, The trip down was along a road that eventually ran along the coast to Tarifa, and we were enveloped in fog which made the massive windmills in the huge wind farms look like something from a fantasy film.  We passed Gibraltar, which seemed less awesome when glimpsed from the perspective of the commercial strip malls of Algeciras.  Benalmadena occupies a small enclave of tastefulness in a sea of over-developed awfulness, and the view of the Mediterranean from Cathy’s house never fails to inspire. After we settled in, we took a ride into Malaga, and visited the cathedral before lunch. 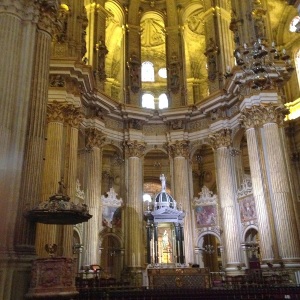 After the cathedral, we looked for the tapas bar we had been to when we were in Malaga in 2010, which was then called La Moraga, and which had subsequently been Manzanilla, which Cathy thought it still was. As it turned out it had changed again and was now KGB.  It looked interesting though, so we gave it a try, and it turned out to be excellent. We had langoustine tempura with salad, a tripe stew Thai style, and another stew with artichokes, egg, and foie gras, Flamenquins, and a hamburger with gorgonzola. With a bottle of a local red, the total was 53 euros.

We then toured the Picasso museum, and strolled along the port, which has been spiffed up with new buildings, restaurants and bars.

Back in Benalmadena Costa, we relaxed for a while at Cathy’s, then the three of us headed into Benalmadena Pueblo (village), which is very charming, with whitewashed buildings and lots of greenery. 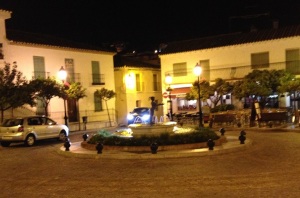 We had dinner at Sollo, a favorite of Cathy’s, which serves only a tasting menu, consisting of countless courses, all based on sturgeon and all incredibly imaginative and delightful.  The chef, Diego Gallegos, is well-grounded and knows how to find his way in the often tumultuous world of the restaurant business.  Make a note of his name.

The food was very innovative, delicious, and plentiful. We had a nice bottle of red from the Malaga region, and the total was 185 euros, unbelievable for food of this quality.  Back to Cathy’s, a few glasses of sherry, and bedtime. Tomorrow, Granada.