Today we got up early to catch our 9:10 train from Granada to Madrid.  Our friend Cathy had lamented how Granada has such poor train connections and has yet to be connected with the AVE high-speed system.  From Granada to Antequera we proceeded at a respectable rate on the single-track line, having to stop from time to time to let trains pass in the other direction.  It is a mountainous route with many curves and scenery to match.  At Antequera, we changed engines and, even more remarkably, the train changed track gauges.  We passed through a shed which allowed the width of the axles to shrink from Iberian gauge to standard international gauge.  This allowed us to use the AVE tracks through Cordoba, greatly speeding things up.

We arrived at Atocha Station at 1:35 as scheduled, then caught a taxi to the hotel we had reserved through Booking.com, the Vita Ingles. Imagine our shock when we arrived there to find it shuttered, with a sign indicating that it was closed and showing a phone number for another hotel, which turned out to be a couple of miles away!  Of course I had never gotten any notice from Booking.com about this. Luckily I had my Michelin guide, and found the Hotel Plaza Mayor which seemed reasonable. We got another taxi and arrived there to find they did have rooms available, and paid 77 euros, which is not bad, but a lot more than the 48 euros for the Vita Ingles. Once we got settled in the hotel, though, I checked Tripadvisor and found that the Plaza Mayor has rooms for 50 to 55 euros through either Booking.com or Expedia. I will have to see the manager tomorrow morning to find out if I can get the discount (Update: The manager basically said “tough shit” BUT when I got home I called Booking.com, and told them what had happened. They had not been notified of the closing of the Vita Ingles either, but were very apologetic and offered me 50 euros as compensation for the inconvenience and extra expense. Now that is great customer service!).

Off to lunch. We picked La Camarilla as it is listed in Michelin and is near the hotel. Since it was Sunday afternoon, the place was packed with local families, babies, and baby strollers.  We had our first taste of Morcilla (black pudding) along with mini hamburgers (served with real ketchup!) and while the food was good, it was not on the level of the other tapas bars we have been trying. After lunch we walked around the center, finding our way up to the Monasterio las Descaleas Reales, across from where we stayed when we were last in Madrid, and then through the Puerta del Sol, taking in the flattering view of the equestrian monument, and then back to the hotel. 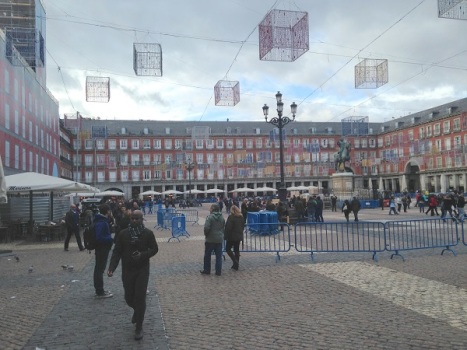 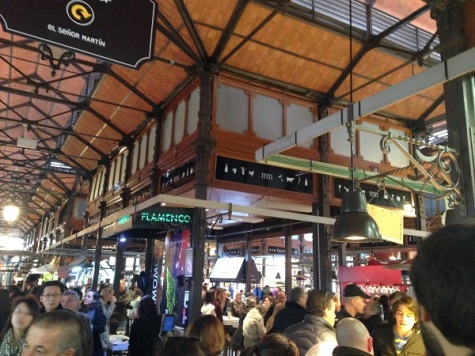 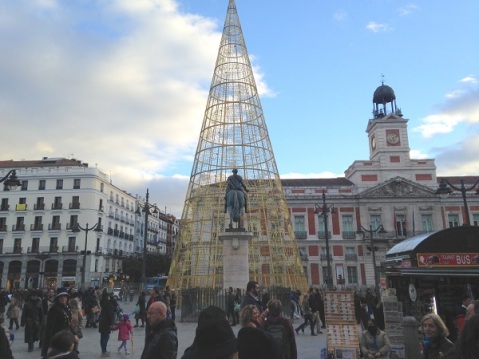 For our last dinner in Spain, we chose Cornucopia, which was recommended by a fellow Chowhound poster, as one of the very few restaurants of any note that are open on Sunday night. 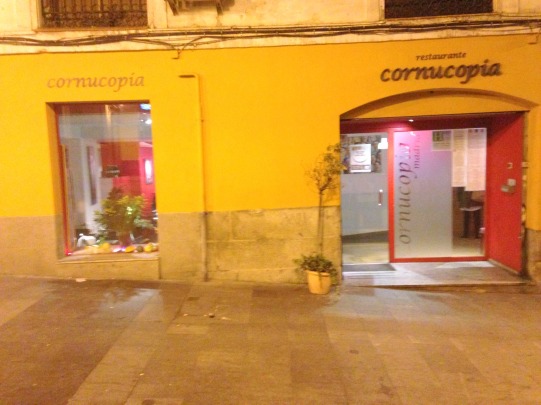 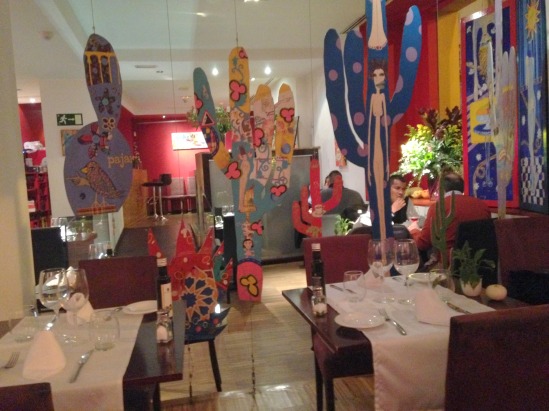 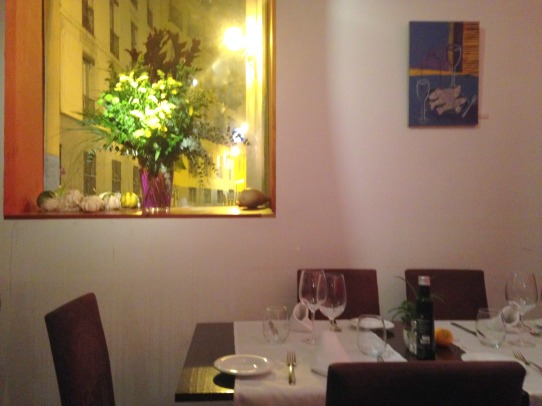 It turned out to be excellent, with interesting flavors, and it is important to note that by making the reservation through Tripadvisor, we got a 30% discount on the food.  They also offer set menus with a number of choices, also at a substantial discount, but not every dish is included in those. We were able to choose from the full a la carte, and with the discount the price worked out to be about the same as the fixed price menu. We both started with the prawns, then had the beef and pork hamburger and the filet of beef with foie gras, followed by a banana panna cotta. The total with a bottle of wine was only 72 euros.  This has to be one of the best deals in Madrid, and though we chose it because of the limited choices for Sunday night, I would go there any day of the week.

This ends our vacation in Spain.  Tomorrow morning it’s off to the airport and back home.  We’ve had a wonderful time.