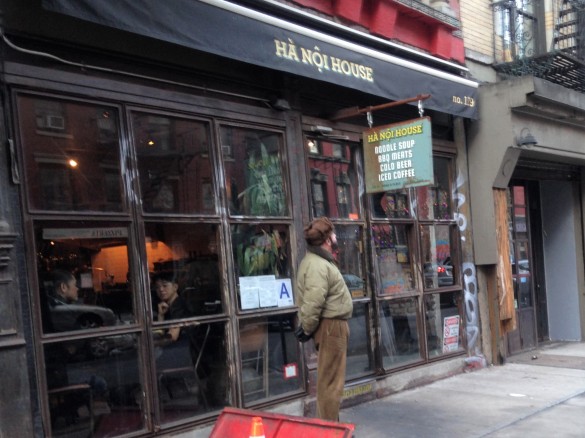 We have now been to Ha Noi House twice.  The first time was in January, and as there were just the two of us and they don’t take reservations for fewer than six, we put aside our usual requirement of eating at 8:30 and prepared for an early Sunday dinner, arriving at 5 and being first in line for the 5:30 opening.  Note that when we left at 7 they were quoting a 2-hour wait.  So, when we returned this past week, we put together a group of six, and calling three days ahead, managed to get a 7:15 reservation.  It’s a bit of an effort, but worth it.

Interestingly, the owners are American but the kitchen staff is Vietnamese.  The cooking is different from the typical New York Vietnamese style, in that it is North as opposed to South Vietnamese, which to us makes it more interesting.  Our other favorite Vietnamese restaurant is O Mai, and I wouldn’t say one is better or worse than the other.  The one exception I will make in that regard is the pho, which we found richer and more rousing at Ha Noi, definitely the best we’ve had, though we are not experts on this cuisine.  Other dishes we’ve tried are octopus, crispy pig’s ear and papaya salad, and summer rolls for appetizers, and for main courses the grilled shrimp with corn porridge, crispy skate with peanuts and pineapple, and bun cha (grilled pork in broth with crab spring rolls, pork meatballs and rice vermicelli, with lettuce for rolling).  These dishes were all outstanding.

There is a very diverse and interesting beer selection.  Seating is tight, service attentive, noise level is high.  Anyone willing to tolerate some inconvenience will be rewarded with some very tasty food.