Arriving in San Miguel mid-afternoon, we found our hotel, the Casa San Miguel, and got settled in before strolling through the historic district to El Pegaso for a late lunch. The hotel is beautiful, hidden behind a wall with a tiny doorway into a small lobby that opens into a gorgeous planted courtyard. The rooms are on three floors (no elevators) with terraces outside. Cheap and charming, we had a spacious room with a small bathroom, for about $100 a night. 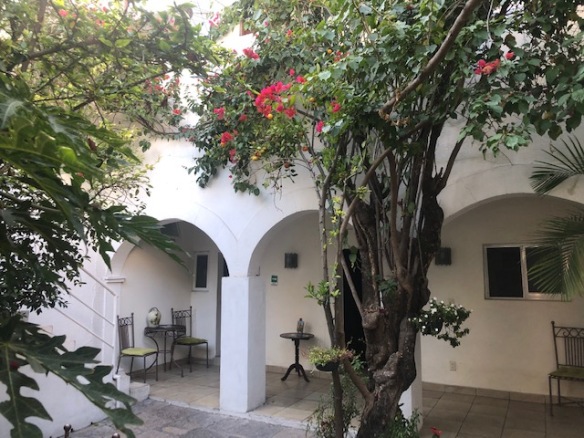 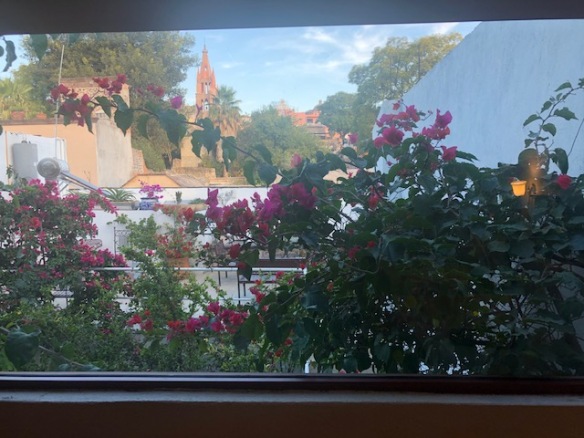 We had a late lunch at El Pegaso, which was nearby and had gotten great reviews on Tripadvisor.

We were seated on the rooftop terrace, which was pleasant.

We all began with gazpacho, which was done properly and made a nice light starter. I had a seafood salad and we all shared a flan for dessert.

Then we stopped into the cathedral, before heading back to the hotel for a short nap. 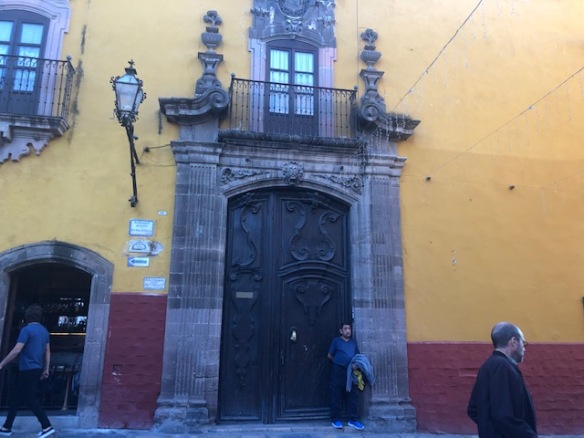 Dinner was a couple of blocks away at Aperi.

Wow! This is a magnificent restaurant. The decor, food and service are beyond reproach. Stanley and I both started with a cocktail, the Yellow Bird, a mixture of rum, banana, strawberry, pineapple, and Galliano. It was delicious. The wine we ordered was a Cabernet from Chihuahua, and it was perfect. 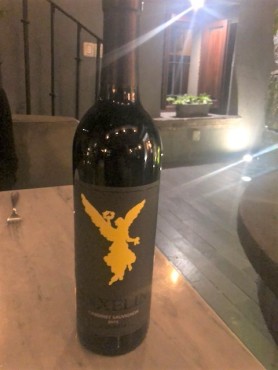 I started with frog’s legs, which were probably the best version I have ever had, with mushrooms, cheese, a tomato sauce, etc. I then had rack of lamb, done perfectly medium rare. For dessert we shared a banana sponge cake topped with chocolate.

We had a wonderful day. Danny has an old friend, Jose, who lives in San Miguel with his wife Monica, and we spent the entire day and evening with them. They are very lovely and interesting people. They’ve both worked in restaurants and Jose was a sommelier, so we had a lot of conversation about food and wine.

We began with breakfast at Casa Blanca (Stanley and I didn’t eat, but the food looked delicious).

Then we then went to La Aurora, a former textile factory that now houses many art galleries, artists’ studios, antique shops, and furniture and decorative arts stores, along with several restaurants. 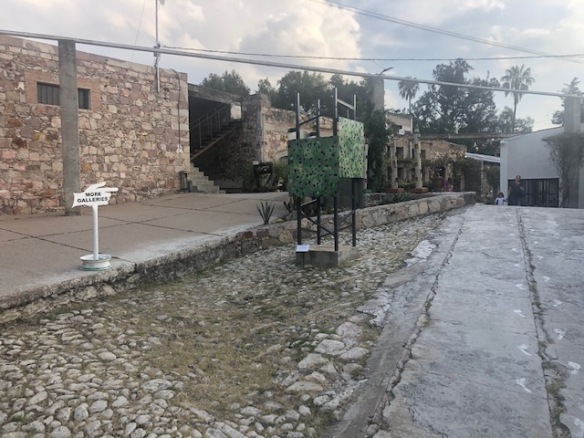 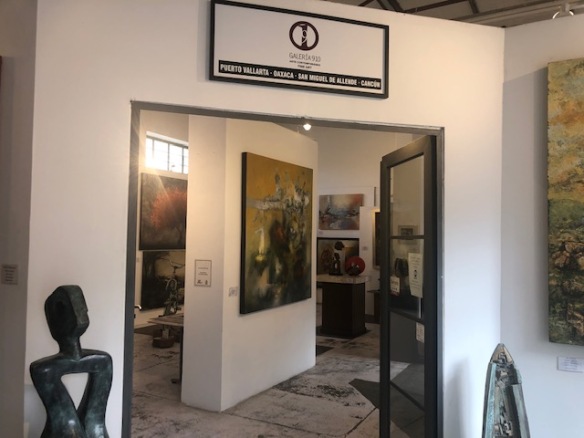 We had a fine lunch at one of them, Food Factory. I had a tasty plate of trout with mashed potatoes, tomato stuffed with cheese, broccoli and zucchini. This dish was only 230 pesos, which is about $12. 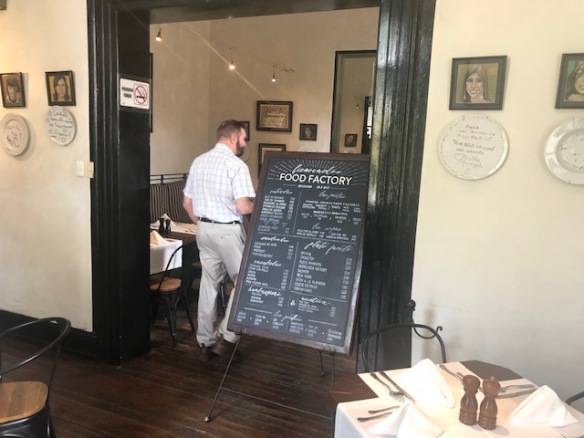 Dinner was at Nomada Cocina de Interpretacion, which certainly lived up to its name. 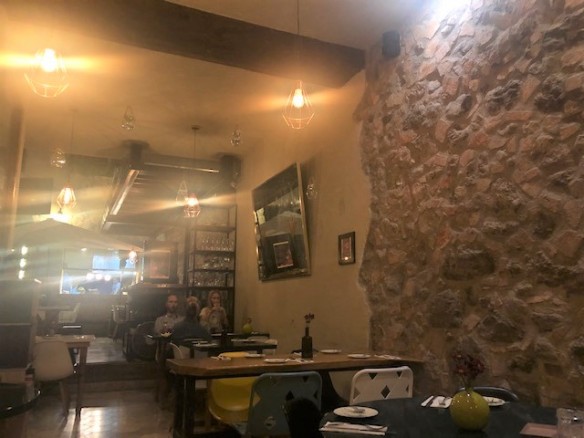 Small plates, but not really small, two dishes per person and a shared dessert is about all we could handle. The food is absolutely fabulous, creative Mexican. The chef is Mexican, but has worked in several European countries, so there is an international influence. The mushroom risotto was a standout, and the roast chicken with peanut sauce, fish tacos and roast pork tostada were truly wonderful. An unusual chocolate mousse is hard to describe but delicious. We had some great cocktails and a good bottle of wine, a blend of cabernet, tempranillo and barbera. 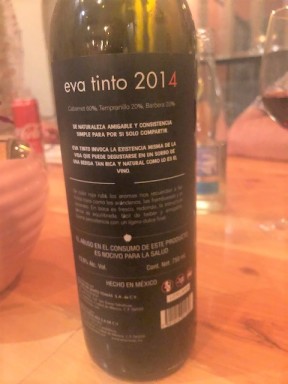 We checked out of the hotel in the morning and drove to Queretaro. Patricia has family there, so she and Danny visited with them, while Stanley and I got together with our friend Joan’s cousin Barry, who she had connected us with and has a lovely house in the historic center. 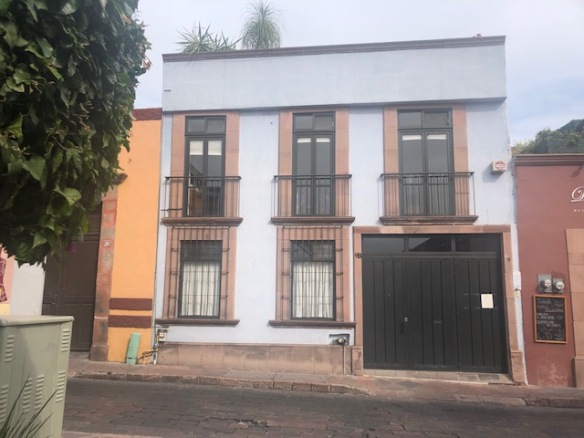 Barry is a real estate broker. If you are interested in buying or renting, short or long term, check out his company, Queretaro Realty: 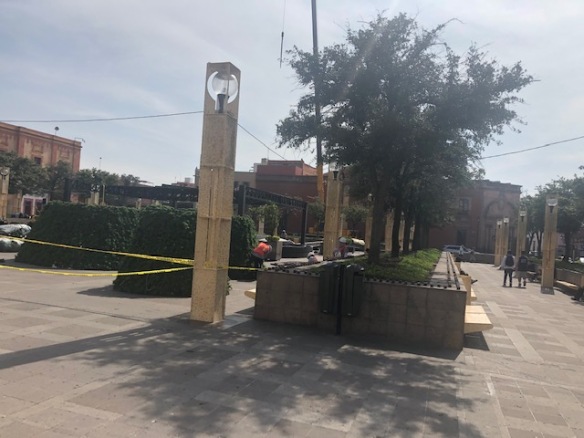 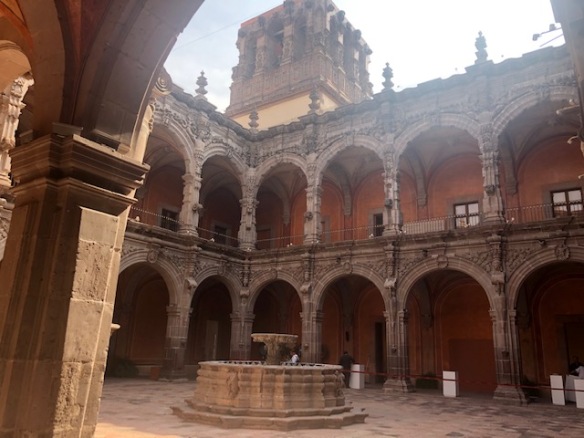 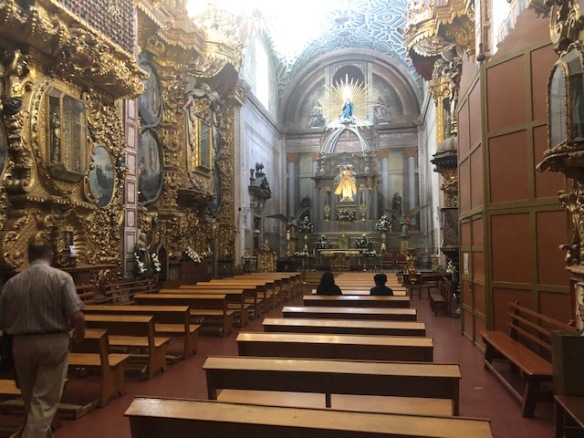 Barry graciously gave us a tour of the town, and we had an enjoyable lunch at a Xoaxacan restaurant, Tikua Sur-Este, which was excellent. 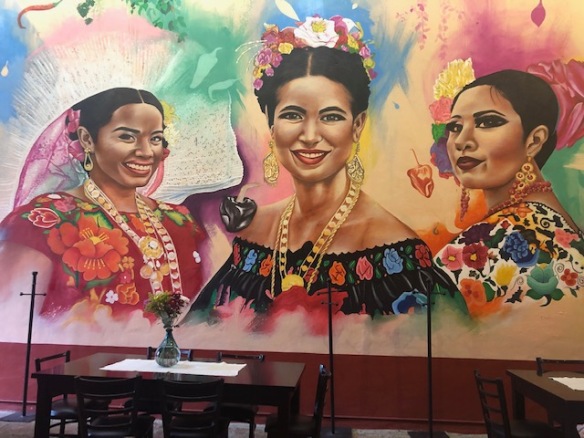 We liked the jalapeno Margaritas, and I had a dish of several sausages from Xoahaca, chopped and mixed with melted cheese. It was served with tortillas, but after having one rolled in a tortilla, I just ate it by itself. It was terrific.

After lunch, Danny and Paty picked us up and we drove back to Mexico City (next post in progress).