Saturday morning we took a stroll down to the old Castello and the sea wall of Monopoli, The old town is a charming warren of narrow streets, alleys and whitewashed buildings. 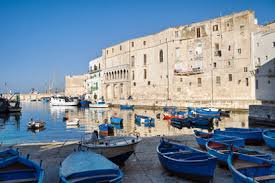 Then we headed off in our car with Marcello to Alberobello, encountering a few hairpin mountain roads on our way up into the lush hills and valleys, heavily endowed with trulli of all shapes and dimensions. These houses are unique to Puglia. Marcello seemed to confirm the tales we had read about the purpose of the conical roofs built without mortar: that they allowed the owners to take down their roofs before the tax collector showed up, thereby escaping tax on what was a non-house without a roof. Strange that the tax collectors never caught on to the ploy. Whatever their origins, the trulli are truly abundant in Alberobello, which is among the most beautiful towns in Italy. We found our way to Pina’s charming one bedroom apartment with a delightful patio and garden area. We had coffee and chatted, in translation. Pina is also a very accomplished amateur artist, the walls being copiously adorned with her works. Pina then took us in her car, since she has access rights to certain restricted areas, and we explored the heart of the trulli district, heavily endowed with t-shirt and ice-cream emporiums, but still quite impressive. As we parked, we spotted an elderly crone sitting in the sun happily knitting, and after Marcello attempted to take her picture, she withdrew in indignation back to her station as the madame des toilettes. In time we met up with Patrizia and Marilena at the small but charming cantina located on the Worth Avenue of Alberobello. The kitchen was open to the few tables, and the staff prepared lunch just like Nonni. I was a bit taken aback by the quick dispatch of dishes and silverware after each course, until Stanley explained, from his perspective looking into the kitchen, that they were furiously washing after each course to make sure there were enough plates and spoons.

Charming small restaurant serving regional specialties. Had a very nice lunch. Assorted antipasti. Mixed grill of lamb chops and sausage, unfortunately the lamb was overcooked. Veal stuffed with cheese in tomato sauce. Cabbage with pancetta. Great biscotti. Notarpanaro Taurino 2006 for 16 euros was a bargain. We were treated so I don’t know what the total bill was, but I would guess no more than 25 or 30 euros per person.

After lunch we returned to Pina’s for coffee and picture taking, then we all headed off to explore the nearby downs of Martina Franca and Locorotondo until the darkness made it impossible to find our way through the streets. We encountered the Church of St. Martin in Martina Franca (naturally), little realizing the impact this saint would have upon us in the days to come. 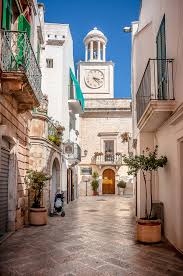 At last it was time for dinner at a splendid restaurant in Alberobello, one of the Ristoranti Del Buon Ricordo (an organization of restaurants that are known for high-quality regional cooking), although we refrained from ordering the special dish which would have entitled us to the commemorative plate we had gotten in other similar establishments on other trips. We were joined by Marilena’s brother Pasquale and his wife.

The meal was worthy of the setting and concluded our visit with Pina, whom we hope to see again in New York.