Our trip to Puglia took place in November 2013, but I thought it would be nice to write this post now, as my Spain posts from last year have proven so popular. I hope the information will be useful to those planning a visit, and to others who may not have thought about touring this somewhat remote and mostly unspoiled part of Italy.

If anyone has any questions about Puglia or any other part of Italy (I’ve been to Tuscany, Umbria, Rome, Piemonte, Trentino-Alto Adige, the Riviera, Genoa, Venice, the Veneto, Sorrento, Amalfi Coast, etc.) I would be happy to respond. Please leave a comment, or email me at rrems@earthlink.net.

We began with an overnight stop in Caserta, near Naples, and then continued on to Puglia the next day.

We landed in Naples and, with some trepidation, found the car rental bus line, and made quick work of getting the car and getting out of Naples and on our way to Caserta. A little confusion finding the Hotel Belvedere, which was in San Leucio outside of Caserta, but we did find it. A very basic place, with odd decor, but perfectly comfortable, and cheap. We ended up parking too far from our luncheon location, but we made it in good time. Before visiting the royal palace, we had lunch at the nearby Le Colonne, which has a Michelin star. We were the only people having lunch as the first couple and their dog left shortly after we arrived. The chef here is deeply into concept cooking, and we were treated to headphones and an English (British) language dissertation on the quality of the bread and water, courtesy of the Ministry of Silly Walks. Her real forte, however, is working with mozzarella in all forms. Our first courses (mozzarella stuffed with peppers, and a pizza like none we’ve seen before, with a crust made of mozzarella) were very good, secondi (meat) were somewhat less successful, though still pretty good. Vitello tonnato was made with breast of veal, and was just a bit dry. We had a nice spumoni for dessert. The place is rather formal, with excellent service. Not bad for just about 100 euros with wine. 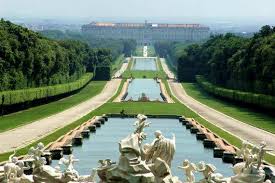 After lunch we did La Reggia, the huge palace that was built out of Bourbon cousin-envy for Versailles. It is vast, and not in the best of shape, although the state apartments have the requisite amount of gilt. The Venetian glass chandeliers, however, could have used a good wipe with Windex and paper towels. Caserta is a neat little town, and we had ample opportunity to get lost in it while driving. We returned to the hotel and took the mandatory hour and a half nap. Dinner was at a local restaurant in San Leucio, where it was thoughtful of us to reserve as we were the only customers. It was late in the season, with week-night customers growing fewer and fewer.

Ristorante Leucio has good traditional food for a very reasonable price, though oddly they add a 12% service charge. Baby octopus with tomato and olives was delicious, pasta was a bit heavy but the pistachio pesto on it was great. My orata with tomatoes was superb and a bargain at 15 euros. Filet of maialino was overcooked but flavorful, with a delicious red wine reduction. The wine was excellent, a Cecubo 2007 Villa Matilde for 18 euros. They have an interesting list of local wines. We enjoyed this meal very much. Off the beaten path and totally authentic.

And so to bed after about 40 hours of continuous activity.

Off in the morning in a mixture of fog and slight drizzle as we drove across Campania and into Puglia. As we descended into the coastal plain, I was greatly impressed by how lush it all was, with olives, fruit trees, grapes and cactus in profusion. We arrived at Andria with the intention of driving through the town on our way to Castel del Monte, but it turned out to be more of a drive around the town onto the road to Castel del Monte. 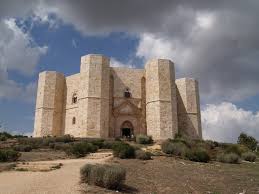 The road to Castel del Monte was lined with very substantial olive plantations and estates, leading to Stanley’s comment that we were surrounded by oil money. Castel del Monte was built by Frederick II of Swabia, the famous “Stupor Mundi” who spent a lot of time in Puglia commissioning churches and castles and the like. This octagonal wonder has been extensively restored by the Italian State and commands a splendid view of the length of the Adriatic coast. It is not, however, extensively furnished, so the visit was not prolonged. The car park had an elderly attendant with a sign around his neck in English exhorting us to tip him. It seemed prudent. We then drove back and around Andria to Barletta, where I had scouted out the restaurant, Baccosteria. Parking near the old town and wandering about, we came upon the Colossus of Barletta, which looked awfully familiar, as I know I have seen it featured on the cover of a book. 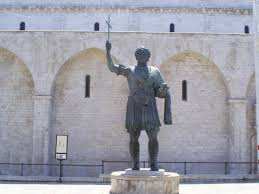 I chose Baccosteria based on reviews in Michelin. A plate of crudités, an assortment of bruschetta, and a bowl of lightly sauteed grapes were brought to the table while we perused the menu. We then had tagliatelle with black truffles and porcini in a sauce made with foie gras, and cavatelli with tiny clams, arugula and pignoli in a broth. The tagliatelle was exceptional. Next we had a filet of beef with a curried cream sauce, cooked perfectly rare, and monkfish , both very good. The atmosphere is very charming. With a bottle of 2011 Amativo, the bill was 79 euros.”

After lunch we got on the coast highway, taking the tangenziale around Bari, and found our way into Monopoli. The next few days would be spent with our friend Marcello, his sister Patrizia, mother Marilena and great-aunt Pina. We stayed in Marilena’s apartment in Monopoli, which made a great base for touring. Dinner that evening was in Polignano a Mare, just up the coast. It is a more scenic and smaller town, with a dramatic viaduct and houses perched on the edge of the Adriatic.
Although we made two visits into it, they were both at night, but it is dramatically lit. We went to a popular seafood place with Marcello, Marilena, her older sister and her husband and were joined by Patrizia, whose train was late in arriving from Bologna. A grand time was had, in translation, by all. 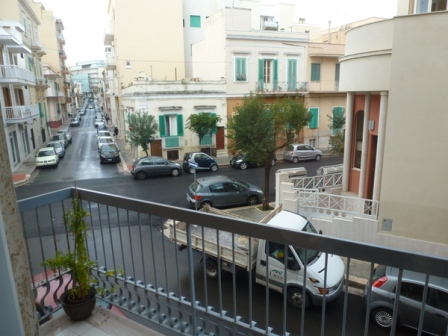 View of Monopoli from our balcony

This is a favorite of our friends in Monopoli. Started with seafood ravioli in a tomato sauce, then had prawns wrapped in speck and fritto misto. For dessert, tiramisu and Sicilian cannoli. Lively, bustling atmosphere. Total for 7 people was about 175 euros including a few bottles of wine. “

The town square features a statue of the native son and songster whose chief (if not only) claim to fame was his immortal rendering of “Volare.” Move over, Vic Damone.