We headed off by car with Ana and Bertrand for our day trip to Troyes. No rain, but the usual seasonal gloom of northern France. We parked on the edge of the old city, but across the river/canal from the Cathedral. We got to the Cathedral before it closed for lunch, and Stanley related the history of the marriage of Henry V to Catherine of Valois, the merger of the French and English crowns which that marriage effected, and the resulting long wars, Joan of Arc, and all that. Also noted, based on Prof. Stephen Murray’s studies of Troyes Cathedral, that its finances were marred by conflict between the town and church authorities, exemplified by the fact that the Cathedral stands apart from most of the commercial center. 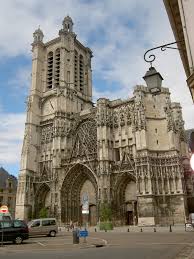 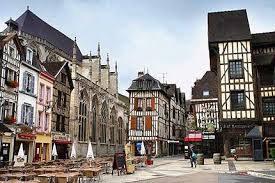 Work resumed after the King gave a license on the local salt tax, but even so, only one west tower was built. We wandered into the old town, which still has many 16th C. timbered buildings leaning at challenging angles, and scouted out restaurants, since the one we had planned on was complet. Before lunch, however, we stepped into a chocolate shop, only to discover that the proprietor was the champion dessert maker of 2013, and the chocolates were quite incredible. It was Pascal Caffet, which has a number of locations but originated and is based in Troyes, and we resolved to return after lunch to buy a dessert for Sunday lunch en famille. We settled on La Mignardise for lunch, in a suitably ancient and leaning structure.

Our originally planned restaurant, Valentino, having been booked by a large group, we tried the second most interesting looking place. Note that though Valentino had a Michelin star at the time, it no longer does. La Mignardise turned out to be very good indeed.

Grilled mushrooms with bacon, pumpkin soup, rabbit terrine, guinea fowl with apple and cider sauce, sandre (with more grilled mushrooms and bacon, wish they had told me so I could have chosen a different appetizer), andouillette, pear in filo with caramel sauce. Refined service and an atmosphere of rustic elegance. With one bottle of wine, and coffees, the bill for 4 was 184 euros.

After lunch we did indeed return to Pacal Caffet and bought a cake for Sunday.

Also noted in passing was a rather upscale burger joint intriguingly named “Rosaparks.” It seems to be located only in Troyes, and is an organic/Halal/superhip-in-a-French-way restaurant. We then found our way to the Museum of Tools. Every hammer, wrench, trowel, level, and thingamabob you can imagine has been collected, and it might have made more sense to acquire an English audioguide, but we wandered about dumbly. Nonetheless, an interesting display. We retrieved the car and drove back to La Varenne, and Stanley and I then made our way back into Paris for dinner at: 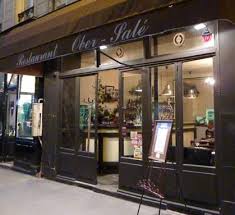 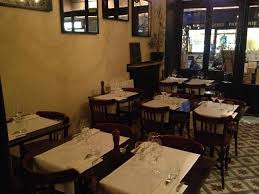 Another small and unassuming place, with one waiter doing a great job of handling the entire room. It was Saturday night and the room was filled. A number of walk-ins were turned away.

We each had a kir to start, one with Cassis, the other peche, then a bottle of Syrah d’Ardeche 2010, which was quite good. We don’t often see Ardeche wines, so it was a nice surprise (29 euros).

Sunday morning market in La Varenne, and as Ana was committed to do substantial marketing at the hypermarche, we hoofed it by ourselves down to the square.

We bought two good sized pintades (Guinea hens), along with some shallots, haricot verts and parsley. Alex had indicated a preference for a large lunch rather than coming for supper later, so we set to work almost at once to prepare the pintades, garlicked mashed potatoes and haricots. I made the English-style parsley sauce, which led to confusion on the distinction between heavy cream and creme fraiche, which Ana had bought at the hypermarche. In fact, what we call heavy cream, the French call light cream! We had enough in any event. Alex and Marie showed up a bit late, but all passed in good order. Bertrand had made an early retreat to the local auction house, since they were bidding on a 19th C. vitrine. After the champion dessert from Troyes, Ana, Stanley and I joined Bertrand. It was a small turnout, and mostly dealers, we were told. Things were going at or slightly below estimates, and they got the vitrine for somewhat less than they were estimating. We returned to the house and supped later on leftovers, allowing Bertrand extra slices of the champion dessert.

The cab arrived promptly at ten o’clock, and after saying our farewells, we got in and experienced a blissful passage to the airport and an untroubled flight back, arriving a bit early in Newark and training back to Penn Station, ending another memorable vacation.