Once again, as my travel posts have proven extremely popular, I am going back a bit to include some of our experiences that predate the beginning of this blog

After our trip to Puglia, we headed to Paris for a few days, staying with our friends Ana and Bertrand in La Varenne, an elegant suburb a few miles East of Paris, where they have a beautiful old house overlooking the Marne.

We packed up and headed out of Puglia by seven o’clock to give us enough time to get back to Naples for a 12:45 flight to Paris via Munich. There was rain along the way, but it was sunny in Naples by the time we arrived, dropped off the car and made it to the airport. There was chaos at the automated Lufthansa check-in with a group of American tourists nesting in front of the four consoles like turkeys, but incapable of getting anything to work. We finally got to the front of the line and had a small delay until we realized we each had separate ID numbers for our tickets. Life was simple after that, and we arrived in Paris ahead of schedule and were out of the airport and into a cab in about fifteen minutes. We got to Ana and Bertrand’s by six thirty, half an hour ahead of our planned arrival. As their son Alex is now living with his girlfriend Marie, we had his room, the top floor suite, to ourselves. We had some kirs and then we were off to Paris for our dinner at Pirouette, after Ana had regaled us with the story about the children’s song of the same name:

Our first meal of this trip was in many ways the best. Beautiful atmosphere, excellent service, and very creative food. A real bargain at 40 euros for a 3-course dinner (with supplements on a few dishes), and a good selection.

Gazing out the window, it seemed to me they had put a new roof on the house and had all the trim painted, which truth was soon confirmed. They waited until after Alex had decamped to properly insulate the top floor and put in all new windows. Such wise parents. From the new windows we could see that, due to the unrelenting rain, the Marne was at first level flood stage and was coursing past us at a rapid pace. Now that Ana and Bertrand are both retired, they tend to wander around the house like Ozzie and Harriet. Ana decided to join us for our morning jaunt into Paris, where we visited the Musee Carnavalet in the Marais.

We were expecting it to be small, but it turned out to be quite extensive, and filled with all sorts of furniture, art and everyday objects relating to the history of Paris. There are a number of reconstructions of Paris interiors, such as Marcel Proust’s bedroom, the Fouquet jewelry store, and the original furnishings from the Cafe de Paris. It’s very impressive, and you could spend a lot of time here. We had to rush through the French Revolution, missing much of it, as Marie Antoinette might have preferred.

We then left Ana and found our way over to rue George V and our lunch at Le Cinq. Rain showers came and went, and we watched from our perch in the restaurant looking into the courtyard at the George V, now a Four Seasons.

The food was superb, service flawless, the room gorgeous.

Mushrooms with foie gras and pistachio mousse. Tagliatelle with seafood. Pigeon with foie gras wrapped in spinach and bread crust. Root vegetables. This has to be the best pigeon dish I have ever had. Eel and octopus. Banana cake. “Mont blanc” (apple covered with apple sauce in a meringue shell).

I was surprised that they were being rather stingy with the mignardises.

After lunch we went to the Musee Jacquesmart Andre, where it seemed the last time we were there the private apartments had been undergoing renovation, so now we took them in. The special exhibition was on Victorian English paintings of women (not by women), most of whom had that wide-eyed look of people suffering from migraine. 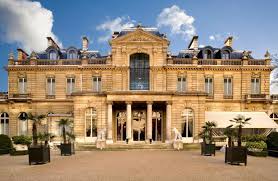 A message came from Marcello that, due to an accident, his flight to Paris was cancelled, and he was going on directly to London, so could not join us for lunch the next day. Back to La Varenne, where we stopped on our way at the new shop of Spanish/Catalan specialty items where we managed to buy two bottles of Pedro Jimenez sherry, and where the kind proprietress gave us sample tastes of her Iberico jamon. We changed clothes and had a quick aperitif before heading back into town for dinner at:

This was disappointing. Certainly the food was tasty, but…

Felt very touristy. It’s obviously been discovered by loud Americans and Brits. Stanley felt like he was on a trampoline due to the idiot at the next table who couldn’t sit still on the banquette, chattering away with his 3 female pals, with every other word out of their mouths being “like”. This is what we go to Europe to get away from.

Service was friendly and the server did speak French with us, but the kitchen seemed overwhelmed and the wait for the main course was interminable. We skipped dessert. Total for 2 with one bottle of wine, 109 euros.

In the morning we traveled into the city and wandered about looking for passages couverts (corridors in or between buildings, with glass roofs, lined with shops and restaurants).

An elegant one near rue des Petit Champs had a shop window with a pop-up style rendering of typical New York streetscapes which featured a Kennedy Fried Chicken. How nostalgic! A less elegant passage off rue St. Denis had a glatt kosher luncheonette. How neuralgic! In time we found ourselves back on rue George V and walking up on the other side of the street to L’Instant d’Or, where Ana and Bertrand arrived at exactly the same moment to join us for lunch.

This is a great lunch deal at 36 euros. Wine prices are very steep, as much as at Le Cinq. A Cotes du Rhone Villages was 75, though I must say it was a very good Cotes du Rhone.

The food was excellent. Service was attentive except, oddly, they neglected to refill our wine glasses twice. That would be excusable if they had put the wine on the table, but they did not.

This is an opportunity to have a luxurious meal at a very reasonable cost. The Michelin star is well deserved. Total for 4 with one bottle of wine, water and coffee was 240 euros.

After lunch we ducked into another passage couvert on the Champs Elysee, which, though elegant, had somewhat downscale shops reminiscent of Fifth Avenue below 42nd St., with souvenirs and such. We then hopped over to the Musee D’Orsay to see the special exhibition on male nudes. The curator here was suspiciously partial to recent works by Pierre et Giles, so much so that it all seemed a bit of a front for their latest show. The typical French logic asserted itself in the last niche, where a sign warned about appropriateness for young people. This after an unrelenting barrage of St. Sebastians and nude men in various states of decapitation, disembowelment and general sanguine horror. All because there was a video of young men cavorting in a pool. In the gathering gloom, we returned to La Varenne and again prepared for our evening meal at:
Youpi et Voila

We loved this. PhilD’s description on Chowhound was 100% accurate. Very plain atmosphere, very informal service, but attentive and cordial. The evening’s menu was all seafood.