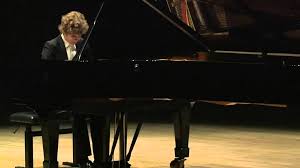 Last night Stanley and I attended the Carnegie Hall debut of the 25 year-old Russian pianist, Pavel Kolesnikov. He is the 2012 Laureate of the Honens International Piano Competition, which is based in Calgary, Alberta. We were there along with some other members and friends of the Council for Canadian American Relations [ See, May 2014 listing: https://robertrems.com/2014/05/01/ccar-gala/ ]. Stanley is the Secretary of CCAR, which has established an endowment with Calgary Foundation to support the Honens Competition. You can read more about the Honens here: http://www.honens.com

We were seated with an excellent center view of the stage in Zankel Hall and surrounded by a rather youthful and enthusiastic audience. The program included works by Mozart, Schumann, Scriabin and Beethoven, all of which were superbly played, but his renderings of the two Scriabin pieces were truly astounding.

A reception followed at The Russian Tea Room, where we have not been in ages, and which brought back memories of the old radio ads by Faith Stewart Gordon. There was champagne and wine and passed hors d’oeuvres and desserts. We got to chat with Pavel, who is living in Hammersmith, London, and enjoying a busy travel schedule of performances and recordings, all of which are part of the three-year career development program that comes with the Honens Laureate (as well as $100,000). We also chatted with the many visiting Calgarians, who were treated to a visit to the Steinway factory as part of their visit. You can learn more about Pavel at his website: http://www.pavelkolesnikov.com